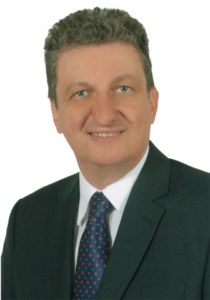 After receiving as many distinctions as the amount of years of secondary education, Dr. Karvounis  was among the best to be accepted into the Medical School of Athens, from where he graduated with honours and the 3rd best grade. He received an award from the International Hippocratic Foundation of Kos in 1992, from the rector of the University of Athens, with an Honorary Graduation Ceremony at the Ancient Asklepion of Kos. He was a Doctor of the Non Commissioned Officer Army Academy for two academic years in a row. He worked for six years for the fourth Surgery Clinic of “Evaggelismos” Athens General Hospital. During that period, he worked and participated in the educational program and the activities of the University Intensive Care Clinic. He received the degree of specialization in Surgery, after an excellent performance in written examination and without any  oral exam. He received the highest possible Scholarship from the Hellenic Surgical Society for postgraduate training in Endocrine Surgery, at a foreign centre, after evaluation of his resume and taking into account his results following written exams at a national level.

He worked as a Surgeon in many hospitals in Great Britain, such as Hammersmith Hospital, Charring Cross Hospital, The Royal London Hospital, St Bart’s Hospital, as well as the private clinics Cromwell Hospital and Clementine Churchill Hospital. He served as a Deputy Director of the Surgical Clinic of Ealing Hospital in London. While he was working as a Fellow at the Endocrine Surgery Unit, Hammersmith Hospital, Royal Postgraduate Medical School, London, UK, he received further training and specialised in Endocrine Surgery, next to the distinguished surgeon and charismatic professor Mr John Lynn. It is the UK’s most renowned Centre of Endocrine Surgery in tertiary education, with surgical referrals from patients from England, Scotland, Wales, Commonwealth nations and the whole of Europe.

He occupied himself with the whole spectrum of Endocrine Surgery, giving emphasis on his special scientific interest, the minimal invasive surgery of thyroid and parathyroid glands. He specialised and applies new techniques and methods. He applied the video-assisted thyroid/parathyroidectomy. He focused his interest in the radical treatment of malignancies of the thyroid gland, with selective use of portable sonography (portable US lymph nodes metastasis), before neck dissection. In his daily surgical practice, he has introduced the use of radiofrequency, ultracision, ligasure, for a safe and absolutely accurate and radical dissection, and detachment of the thyroid gland with simultaneous haemostasis. Moreover, with the method of intraoperative neuromonitoring he ensures the integrity of the recurrent laryngeal nerves, by minimizing the possibilities of postoperative speech disorder. He gets a second confirmation of the integrity of the vocal cords, by using video-laryngoscopy during extubation and waking up the patient.

For him, the method of intraoperative parathyroid hormone monitoring (intraoperative PTH) was a work and research subject in England, and he still applies it always in performing absolutely successful “guided” parathyroidectomy with minimally invasive technique, often under local anaesthesia in external patients. Finally, he developed and perfected plastic reconstruction surgery, without any stitches and with a postoperatively perfect aesthetic result.

He is a Doctor in Medicine from the Medical School of the National University of Athens.

He participated in teaching students of the Imperial College of Medicine, University of London, in subjects of Endocrine Surgery during the Clinic of the same name of the Division of Surgery, Hammersmith Hospital. While he was working, he participated in teaching graduate medicine students, of Barts and The London Queen Mary College of Medicine, University of London. He was a health subject instructor for the students of the Non Commissioned Officer Army Academy for two academic years.

He co-organised the 10th Panhellenic Conference of Endocrine Surgery and was a speaker in the round table session of the conference, talking about Modern Thyroid Surgery in Greece.

He was trained among top thyroid surgeons in the world, in the new, revolutionary technique of removing the thyroid through the mouth in the 2nd SARC Transoral Endoscopic Thyroidectomy Workshop (Academy of Medical Research Singapore, 2018).

He has extensive research work with active participation in clinics and clinical-laboratory research studies carried out at the Department of Laparoscopic Surgery, Ealing Hospital, London, U.K. Those full studies and/or parts of them, have been published in prominent international medical journals.

He has a broad written work, with participation in writing books in the “Developments in Surgery” book series in 1998 and 2000, a multitude of publications in respected medical journals, publications in Greek medical journals and press. Furthermore, his written work ranges from   plenty of scientific reports at international and Greek surgical congresses, active participation at scientific seminars, postgraduate programmes, and  educational seminars, to surgical symposia in Greece and abroad.

He is a reviewer for the medical journal HORMONES – International Journal of Endocrinology and Metabolism, Springer Publishing.

He was honoured with the first award from the Educational Committee of the Hellenic Surgical Society after examinations in 2001. He received an award for the best scientific work (“Minimally invasive parathyroidectomy under local anaesthesia” E.Karvounis and J.Lynn) in the International Surgical Forum of 2002. A scientific presentation of his work in collaboration with the University of Toledo, Ohio, USA, received the distinction “Guided Presidential Poster” at the World Endocrinology Conference ENDO 2019 in America.

He received the accreditation “Center of Excellence” (2018), for thyroid and parathyroid Surgery, in Euroclinic Athens, after strict evaluation of an especially large volume of incidents per year, with remarkably low percentage of complications in relation to the international standards.

Today, he works as a Director Endocrine Surgeon, in Euroclinic Athens and has a private practice at Vasilissis Sofias avenue in Athens.

This website uses cookies to improve your experience while you navigate through the website. Out of these, the cookies that are categorized as necessary are stored on your browser as they are essential for the working of basic functionalities of the website. We also use third-party cookies that help us analyze and understand how you use this website. These cookies will be stored in your browser only with your consent. You also have the option to opt-out of these cookies. But opting out of some of these cookies may affect your browsing experience.
Necessary Always Enabled
Necessary cookies are absolutely essential for the website to function properly. These cookies ensure basic functionalities and security features of the website, anonymously.
Functional
Functional cookies help to perform certain functionalities like sharing the content of the website on social media platforms, collect feedbacks, and other third-party features.
Performance
Performance cookies are used to understand and analyze the key performance indexes of the website which helps in delivering a better user experience for the visitors.
Analytics
Analytical cookies are used to understand how visitors interact with the website. These cookies help provide information on metrics the number of visitors, bounce rate, traffic source, etc.
Advertisement
Advertisement cookies are used to provide visitors with relevant ads and marketing campaigns. These cookies track visitors across websites and collect information to provide customized ads.
Others
Other uncategorized cookies are those that are being analyzed and have not been classified into a category as yet.
SAVE & ACCEPT